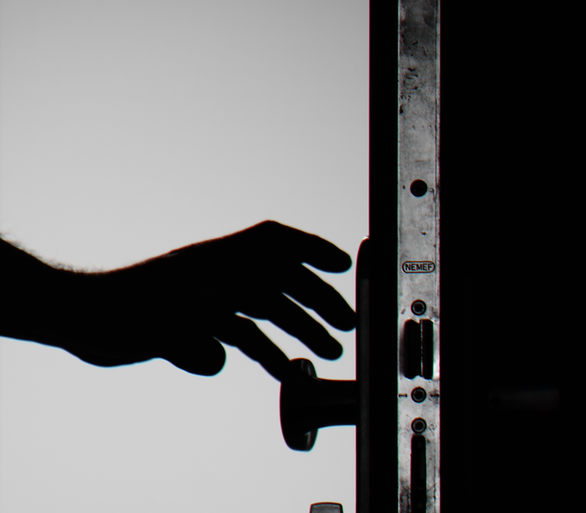 Penelope walked out into the hallway. The house was quiet and still as everyone slept. She went into the living room and looked down at the people, deep in their slumber. She scanned the room, looking for Ivy. Her heart dropped into the pit of her stomach. Ivy was not there.
Penelope ran outside into Freedom Park. The moonlight hung over her and the sounds of an owl could be heard in the distance. The chickens and pigs were quiet and there was no activity out there except the flowing dance of the leaves above. She went to the coy pond but only an empty bench and leaves rolling by could be found.
She ran down the stone path to The Darius’s room but she found herself standing in an emptiness, the sound of her beating heart filled her eardrums with dread. She ran back to the house to look in all the rooms but she knew Ivy would not be found there. She looked anyways, a lie to herself that this may just be a nightmare that she’ll wake from.
Penelope walked into The Love Room.
“Where is Ivy?” The Darius asked, lying on the bed with his legs crossed and hands on his stomach.
“I don’t know. I looked everywhere and I couldn’t find her.”
“There’s only one more place she could be.” The Darius said.
He stood up and walked over to Penelope, just a few inches from her face. He grabbed her neck and squeezed it between his fingers. Penelope’s face turned red and she stared at The Darius with a smile, her face shook from his grip.
“We cannot let her get away. She belongs to Freedom House,” he said. He released her neck and she continued to smile.
The Darius walked out of the room and stood in front of the Red Room door. Penelope followed him.
“Unlock it.” The Darius said.
Penelope reached into her apron pocket and felt the emptiness at the bottom of the pocket seams. She checked the other pocket and felt The Darius’s eyes digging into her mind, like the claws of a vicious tiger tearing into the flesh of its victim to get a taste of fresh, raw meat. She looked up at him.
“It’s not here. I don’t understand. I always keep-”
The Darius ignored her and took his key from his pocket and unlocked the Red Room door. They stood there and stared down into the stairway. The Darius’s face was hardened with anger but there was glee in his eyes as he imagined what he was going to do to Ivy when he found her, an opportunity for him to play and teach her a lesson.
“I’m sorry The Darius. I’ll go with you and-”
The Darius interrupted Penelope, “Get me Cyrus. I don’t need you.”
Penelope’s eyes filled with hurt but she did as commanded. She walked to the living room and shook Cyrus.
“What time is it?” He yawned and stretched out his arms.
“The Darius is asking for you. It’s an emergency,” Penelope said in a low voice as to not wake the others.
Cyrus stood up and followed her. He saw The Darius standing in front of the Red Room, facing the stairwell that led down. The Darius did not turn to look at Cyrus. His eyes stayed locked on the stairwell leading into his next journey that would quench his thirst. Cyrus stood next to him and waited.
The Darius continued to look down and said, “Cyrus, we have a little problem. Ivy is missing along with Penelope’s key to the Red Room. Do you know anything about this?”
“No.” Cyrus’s eyes moved back and forth as his thoughts connected. He ran back to the living room and looked at all the members sleeping. He went back to The Darius.
“Zoe is missing too.”
The Darius now turned and looked at Cyrus.
With a calmness in his voice The Darius said, “Well, I guess we know what that means. We must show them how important the journey is because it’s clear they don’t realize how important it is.”
And with that, The Darius walked with a grace down the stairs, not rushing and not running. Cyrus followed and as he closed the door behind him, Penelope stood there looking down at them, wishing The Darius needed her like he needed Cyrus.